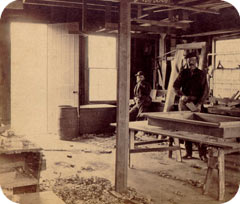 ACORN Furnishing Corporation ( ACORN Corporation ) was founded in 1999 by Frank F. Bozic based on a long tradition of a family-owned business.
The company was originally founded as Drvodjelac (translated Wood Worker) in 1954, in the historic town of Vares, Bosna i Herzegovina, by master carpenter and cabinet maker Mihael Bozic, the grandfather of today's owner and company president, Frank F. Bozic. Mihael eventually handed down the company to his son Florian Bozic who continued the company’s dedication to hight quality work.
Frank Bozic started working as an aprentice to his father, first in the carpentry shop, before moving on to learn the ropes of the business. He took over the family business after his father passed away and expanded the company to perform a variety of additional services.
In 1999 Frank Bozic relocated the company to the United States. Now based in New York City and operating under its American trade name, ACORN Corporation, the company has continuously grown and does a variety of jobs ranging from private residences to commercial projects.
BACK